Print of the Month

Each month I will feature a special on a selected print. To be notified by email of the Print of the Month, please join here.

From now until April 30, 2016, matted and framed prints of this image in any standard size are available with free shipping. 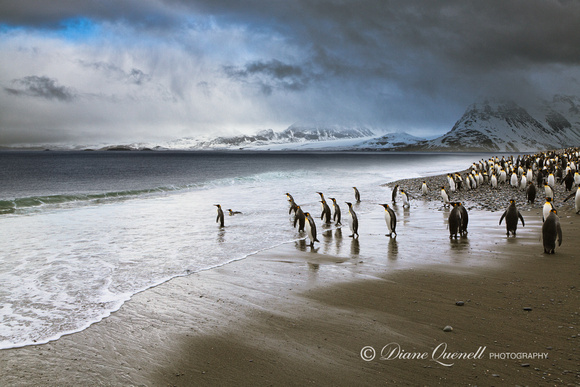 This picture was taken in November 2009 on a month long trip to Antarctica and the islands of South Georgia and the Falklands.

South Georgia is one of the “Sub Antarctic” islands – there are quite a few all around the continent -- not attached to the continent itself, but considered part of it.  It’s a long narrow island with a very high ridge running down the center, which reminds many of the Alps.  Down the sides of the mountains there are numerous glaciers.  Many little coves and bays provide sheltered landing spots, usually with quite narrow beaches.  November is early summer in the southern hemisphere and while there was snow on all the mountains, there was little on the ground.

Along with the scenery, South Georgia is known for it’s wonderful wildlife – fur seals, elephant seals, whales, albatrosses, petrels, and of course, penguins.

This photograph was taken on one of our landings on the Salisbury Plain, a magnificent long, flat area that contains one of the largest colonies of King Penguins in the world.  We watched them surfing in from the sea while others dove into the water to go out – great entertainment, because while they are excellent swimmers, the transition from sea to land is none too graceful.  Kings are the 2nd largest of the penguins after the Emperors, and they average up to 3 feet tall.  Always regal and proud looking, they easily became my favorite species.